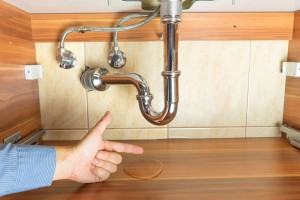 Leaks and drips can appear anywhere in your home and can also be the hardest problem to solve.

This small room is home to a toilet, a tub & faucet, a shower head, and one or more lavatory faucets. As you can imagine, the potential for a variety of plumbing leaks, blockages, drips, etc. is fairly high. Bathroom plumbing problems can also be some of the most difficult to remedy. Often a problems is only noticed as a leak through a wall or a ceiling. At that time, other damage has already been done.

•Clogs and blockages: A backed up toilet may be as simple as a “soft” stoppage that may be remedied with a plunger, any variety of unusual items introduced to the toilet (often by toddlers), or a symptom of a more wide scale sewer blockage somewhere farther along.

•Flushing & Filling problems: These are hydro-mechanical problems that may be a single failed part or several failed parts. Remember, few things last forever sitting in water. Often with older toilets, replacing one old part will only expose weakness or failure in another. It is best to replace an older toilet with a brand new one. It really is not much more expensive than rebuilding all the components of the older toilet.

•Leaks at the base: Often these are discovered when water stains appear on the ceiling below. The most common cause is a problem with the flange that secures the toilet to the floor. If this breaks or corrodes badly, water can leak and will do damage to the subfloor and the ceiling below. If you think you have this kind of a problem, call a professional plumber right away. The longer you wait, the worse the long-term damage.

What’s the best way to check for toilet leaks?

Toilet leaks can be wasteful and expensive. At least once a year, check your toilet for leaks by adding a small amount of red food coloring to the tank, and then check the toilet bowl later. If the toilet bowl water is colored red, water is seeping through from the tank. If it is leaking, you should replace the tank ball.

There are drains from the tub and/or shower, a drain from the toilet, and drains under the lavatory sinks.

•Clogs and blockages: A tub/shower drain blockage is usually a symptom of a “down-stream” problem, but may be as simple as a clogged trap. Tub and shower drains can be difficult to access, so be careful. You may wish to call a professional to assist with these. The traps under the lavatory sink may also be clogged themselves or be backed up from another problem in the home.
Faucet Problems

•The most common problem with a faucet is that it will not shut off completely and drip or run. Typically an older faucet is difficult and costly to repair. You may wish to consider simply replacing it with a new one. Some newer faucets may be repaired by replacing a cartridge in the faucet.

•Tub & Shower faucets can be very difficult to remove, particularly if there is not an access panel on the other side of the wall behind the faucet. If access is difficult, call your plumbing professional to assess the problem before attempting repairs that may damage tile or other fixtures.

•Low water flow: This can often be caused by a clogged aerator. This can usually be removed, cleaned and replaced fairly easily. If, however, the problem with low flow is a more extensive water pressure problem (for example it is evident in multiple fixtures), you may wish to call a plumbing professional to test the pressure throughout the house and trouble-shoot the issue.

Leaks that appear in the ceiling or walls are clear indications of problems either from the floor above or from piping running between the walls. The plumbing professional will investigate the source of the leak by looking at what systems are nearby or above. Water may drip in one area and then “travel” along an internal pipe then fall further down the line where there is a union or drop off. These kinds of leaks can fool you into an immediate and incorrect assumption of the leaks origin.

Want your questions answered by a qualified professional? Give us a call today!